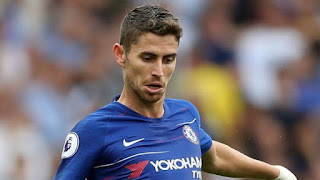 Chelsea midfielder, Jorginho, has revealed that he decided to join the club over Manchester City to work with Maurizio Sarri.
The Brazilian born Italy international was the subject of interest from both Chelsea and City in the summer.
Man City were said to be confident of bringing the 26-year-old to the Etihad but they were beaten to the punch by Chelsea
The Italian midfielder has since impressed at Stamford Bridge and is relishing the chance of working under Sarri once again.
Asked about his decision to sign for Chelsea rather than City, Jorginho told ESPN Brazil, “There are a lot of things behind a negotiation process.
“I believe Sarri’s arrival played a big part on it.
“And there’s also the greatness of Chelsea, such a big club. So these factors helped me making my mind.”
On his relationship with the new Chelsea manager, Sarri, Jorginho added, “Yes, it’s pretty good. ‘He’s always bantering, joking with me.
“He didn’t call me, because he’s not the type to be phoning players, but of course, through agents, I knew what his wish was and what kind of work would be put in here.”