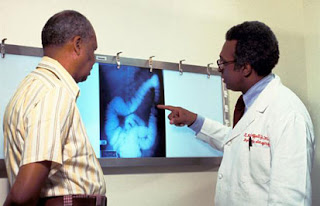 The results of an advanced clinical trial released on Friday suggested that prostate cancer could be treated with single dose , radiotherapy, rather than life-altering hormone therapy. “Ultimately our hope is to delay lifelong hormone therapy, and its potential side-effects, with a once-off (radiotherapy) treatment,” trial leader, Associate Professor Shankar Siva said.

This would represent a major quality-of-life improvement for these men, and a real advance in the way we treat prostate cancer.” Participants in the study would normally have been put on lifelong, testosterone-blocking hormone therapy, the side effects of which include menopause-like symptoms, such as hot flushes, loss of libido and longer-term bone issues like osteoporosis. Over two years, 33 trial patients were given the new method of treatment and monitored. After which, “about half of the patients in the trial didn’t need hormone therapy and in about a third, the cancer didn’t come back during the study period at all,” Siva said. The research, conducted by the Peter MacCallum Cancer Centre in the Australian State of Victoria, found that overall 93 per cent of the treated cancer spots were controlled with the radiation treatment. In a day visit requiring only about an hour, the technique known as Stereotactic Ablative Body Radiotherapy (SABR), delivers a pinpoint accurate dose of radiotherapy to tumour sites. “It’s just a simple outpatient day visit for about an hour to have each SABR treatment and that’s it,” Siva said. Following the treatment the patient’s quality of life was assessed using questionnaires and found to be maintained at pretreatment levels