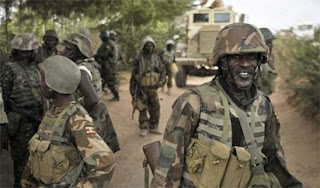 The 16 Brigade of the Nigerian Army on Friday commenced `Operation Crocodile Smile III’ exercise across some states of the Niger Delta, to stem the tide of pipeline vandalism in the region.

Maj.-Gen. Jamil Sarham, the General Officer Commanding (GOC) 6 Division, Port-Harcourt, said the 2018 operation is not going to be different as officers and soldiers had been advised to abide by the rules.

Sarham said that professionalism would be showcased during the operation in the states under division — Akwa Ibom, Bayelsa, Delta and Rivers. He commended Gov. Seriake Dickson of Bayelsa for providing the needed support to the army and other security agencies in the state. Sarham assured the general public that the navy and army would be peaceful during the conduct of the operation. Also speaking, Brig.-Gen. Kevin Aligbe, the Commander, 16 Brigade, Nigerian Army in Yenagoa, said the operation was being conducted under the directive of the Army Chief of Staff. Aligbe said that the Brigade had visited two Internally Displaced Persons’ (IDPs) camps in Igbogene and donated relief materials sent from headquarters. “In line with the Army Headquarters Training Directive for Year 2018, we have commenced preparations that  on Oct. 22, with multi-agency show of force within Yenagoa metropolis and beyond. “Today, we have gathered here at the second army headquarters Nembe for the flag-off of our engagement to dominate the water. “In doing so, we are very much aware of the expectations of the GOC, Chief of Army Staff and the general public of our conduct during period of operation.” He said that at the end of the exercise, they would want to achieve success in order to undertake future tasks and challenges as the yuletide season approaches. In his remarks, the Bayelsa governor urged the public to support and collaborate with the army to achieve the aim of the operation. Represented by the Secretary to the State Government, Mr Kemela Okara, Dickson described the army as a very critical component of the country, especially in the area of security. (NAN)

Read also :The Difference Between a Soldier And You By laf Mayor