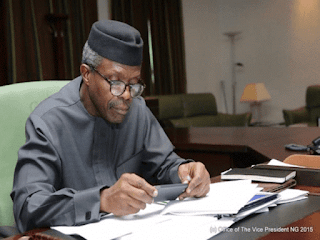 “2017 Appropriation Bill now officially received in the Acting President’s office. Following the receipt, it is now undergoing very prompt and diligent consideration,” Akande tweeted.
In a related development, the Nigerian Stock Exchange (NSE) continued on a positive momentum this week as the market capitalisation of the NSE improved by 2.2 per cent to close at N9.72 trillion yesterday, compared with the N9.51 trillion it closed on Monday.

Also, the NSE All Share Index closed higher at 28,113.38 basis points yesterday, as against the 27,513.69 basis points it attained on Monday.
Similarly, the Naira exchange rate against the dollar appreciated significantly on the parallel market during the week as it gained N6 to close at N380/$ yesterday, stronger than the N386/$1 it was as at Monday, as the central bank sustained its dollar injection strategy.

The National Assembly had raised the budget of N7.2 trillion presented by Buhari to it last year to N7.4 trillion with the appropriation document predicating sources for the funding on oil revenues pegged at N1.985 trillion; non-oil revenues at N1.73 trillion and other federal government’s independent revenues derivatives.
Besides increasing the total budget by N143 billion, the National Assembly also increased its own budget by N10 billion, thus raising its earlier budget proposal by the executive from N115 billion to N125 billion.

The government had ahead of the presentation of the budget in December last year, stated that Nigeria would borrow more from foreign sources than locally sourced funds to finance the budget with a view to deriving greater benefits from lower debt costs and consequently reducing pressure on its interest bill.
On Monday, Barely five days after the budget was passed, the Economic Management Team (EMT) chaired by Osinbajo met in the Presidential Villa to discuss modalities for funding the budget ahead of its transmission.

Crude Oil Prices Rise
Meanwhile, crude oil prices rose yesterday, heading for a second week of gains on growing expectations that OPEC and other producing countries will agree at a meeting next week to extend crude output cuts.
Brent crude closed at $53.53 per barrel, while U.S. benchmark crude oil was up 94 cents at $50.29. Both benchmarks slipped back from session highs after a report that U.S. energy companies added oil rigs again in the latest week.

The Organisation of Petroleum Exporting Countries (OPEC) and other producers including Russia are to meet on May 25. Market watchers expect them to extend output cuts of 1.8 million barrels a day until the end of March 2018.

25.7tr Nigeria Dept Is Not A Crisis – Minister Of Finance Zainab Ahmed

Senate President speaks on scrapping Of Bicameral System Of Govt

INEC To Begin Distribution Of PVCs and CVR