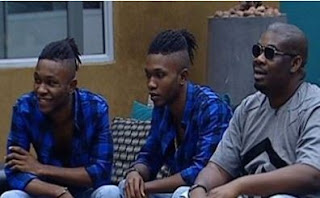 DNA Twins, music duo signed by Don Jazzy into Mavin Records has been arrested by Police in Lekki area of Lagos.

Reports moving around the internet says that they were arrested because they had huge amount of cash/money on them.

It was revealed the police had to chase the singers vehicle before eventually catching up on them in Lekki.

The Policemen seized their car, handcuffed them and whisked them away.

While filing this report the management of MavinRecords are yet to make an official declaration on the trending topic.

100 People Arrested In South Africa For Protesting Against Xenophobia